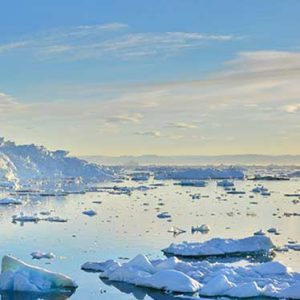 One thing that makes global climate change especially challenging is the very fact that it is global and requires a globally coordinated response. A second is the long time frame of changes —much longer than normal political cycles. A third is the complexity of the interactions between human activities, the atmosphere, and natural ecosystems.

ICAM (the Integrated Climate Assessment Model) was designed to help explore and understand these interactions and evaluate ways to avoid, mitigate, or adapt to global climate change.

It has provided a wealth of important insights. ICAM was developed over a ten year span by Professor Hadi Dowlatabadi and colleagues at Carnegie Mellon’s NSF Centerof Excellence for Integrated Study of the Human Dimensions of for Global Change

Greenhouse warming and global climate change is likely to have substantial effects not only on the natural environment and ecosystems, but also on many human activities, including agriculture, economics, technological innovation, human health, migration, and demographics.

Human societies may choose a wide variety of ways to try to avoid, mitigate, or adapt to these changes. One of the great challenges of understanding the long-term effects is to how all these natural and human systems will interact.

ICAM was designed as an integrated assessment model with the ambitious goal of helping climate experts and policy analysts explore these complex interactions at global and regional levels over the rest of this century.

“We chose Analytica because we wanted a model that would be transparent, with assumptions obvious to all, and easy to communicate. We liked its graphical user interface.

We needed to model the large uncertainties of climate change, so one nice feature was the ease of choosing and using probability distributions.” Professor Hadi Dowlatabadi, author of ICAM, University of British Columbia.

ICAM is possibly the most sophisticated model yet created in Analytica. It was started in 1991 (first with Demos, the predecessor of Analytica) with development and refinements continuing until 2000, reflecting over four person-years of modeling effort. It includes five main modules, shown in this top-level diagram: 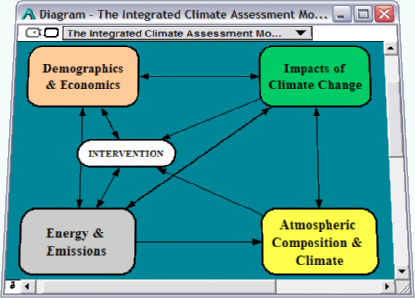 Each module is organized into subsystems – for example, the Atmospheric Composition & Climate module has five subsystems:

The Elicited Climate Model represents key uncertainties about how greenhouse gases will affect climate in the form of probability distributions, elicited from 16 top experts in climatology and climate modeling. The quantities elicited include the change in average global temperature due to a doubling of atmospheric CO2 concentration, the effect on the temperature gradient from the equator to the poles, changes in precipitation by latitude, and the time-constants for these effects. ICAM lets you use any of the 16 sets of expert judgments – or substitute your own. Among the policies to avoid, mitigate, or adapt to climate change, it includes ICAM models the Earth as 17 regions, each with its own population, economy, and policies for responding to climate change. It runs at 5-year intervals from 1975 to 2100. It models the age structure of populations with 5-year ranges and the effects of an aging population on the economy. It represents uncertainties about the costs of new energy and mitigation technologies, and the rate of diffusion of technical innovation from one region to another. It recognizes social resistance or acceleration of diffusion of new technologies. Where there is large uncertainty or disagreement about the appropriate model structure — including energy technologies, landcover dynamics, and discounting methods — ICAM offers options from which the user can choose the structure they like the best.

Here are some of the most interesting and provocative findings from research using ICAM:

A common problem with long-range system dynamic models like ICAM is that trajectories over time may go outside the range of plausibility giving results that are apparently absurd. This is usually because the model lacks a negative feedback loop or bound that would prevent this happening in the real world.

ICAM addressed this problem by adding adaptive agents that respond to goals or try to keep scenarios within acceptable ranges. For example, one agent adjusts the carbon taxes to reach emissions reductions such as the Kyoto accords. Regional agents can let regions opt out of global carbon taxes if the tax is unreasonably high.

A global agent can set binding tighter constraints if most regions experience damage greater than say 2% of GDP. It identifies and can ignore “modeling crises” where trajectories exceed plausible bounds on selected variables, such as where high shadow prices on carbon drive the price to zero.

ICAM introduced several other significant innovations in integrated assessment modeling of the effects of climate change. These include:

The lead author of ICAM was Professor Hadi Dowlatabadi, the Canada Research Chair in Applied Mathematics, Integrated Assessment and Global Change at the University of British Columbia.

Funding for the model and supporting research came from the US National Science Foundation, the US Department of Energy, the Electric Power Research Institute, and the Exxon-Mobil Education Foundation.