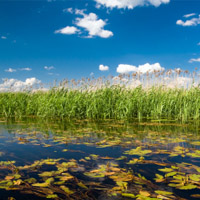 The model predicts the effects of TDML not just on scientific measures of water quality, like dissolved oxygen, but also the observable outcomes that the public cares about — fewer shellfish, toxic organisms, and fish kills.

As a result, the Neuse River has been declared one of the 20 most threatened rivers in the United States. The estuary has also been federally listed as a polluted water under section 303(d) of the Clean Water Act.

As in many marine systems, excess nitrogen has been identified as the pollutant of concern. It is believed to stimulate the excessive growth of algae that is the root of other ecological problems. The United States Environmental Protection Agency (USEPA) has, therefore, required the State of North Carolina to control nutrient release in the watershed to limit nitrogen inputs to the estuary.

The degree of reduction required is to be based on a determination of the Total Maximum Daily Load (TMDL) for nitrogen. A TMDL is an estimate of the maximum pollutant load a water body can handle while meeting water quality standards and supporting its designated uses.

Over the next ten years, thousands of TMDL determinations are needed for pollutants and water bodies across the United States. Typically, TMDLs are estimated using a simulation model that predicts measures of water quality, such as algal level or dissolved oxygen, as a function of pollutant load.

While these measures may be useful indicators of water quality problems, they have little meaning to the general public and decision-makers. Stakeholders care more about observable outcomes, such as harmful algal blooms, fish kills, and shellfish mortality.

At the scale employed by most simulation models, the ecological processes affecting these outcomes are too complex or stochastic to estimate deterministically. However, the aggregate causal relationships are well known, and models can capture smaller scale dynamics probabilistically.

Therefore, the researchers hypothesized that a flexible modeling tool that can link processes at multiple scales, such as Analytica, might address stakeholder concerns more directly, and lead to better decisions for managing water quality.

The sample size you need is controlled by the degree of precision that you want in the output distributions you care about. Suppose you are interested in estimating percentiles of a cumulative distribution, there’s no need to increase the sample size just because you have more uncertain inputs.

For most models, a few hundred up to a thousand runs are sufficient. You only need a larger sample if you want high precision in your resulting distributions, and a smooth-looking density function. Given the inherent uncertainty in the inputs, higher precision is usually an aesthetic preference rather than a functional need.

How Do you get the Input Distributions?

“We chose Analytica because the probabilistic nature of model relationships was consistent with our view of stochasticity as an inherent property of natural systems.”

“Additionally, the graphical depiction of models in Analytica made the basic assumptions transparent to stakeholders. We liked the fact that Analytica allows models to be graphically depicted as nested modules so that complex networks can be represented at different levels of detail. This enhanced model transparency and would not have been possible with a spreadsheet or computer code.”

“The estimation and propagation of uncertainty was also important because EPA requires inclusion of a margin of safety in the TMDL. We felt that such margins should be based on accurate uncertainty calculations, not rules of thumb as was common practice.”

“Analytica helped us do this by allowing continuous or discrete variables to be related by any functional expression and depicted by a wide variety of probability distributions. This was not the case with other influence diagram or belief network software that was available.”

These submodels were developed using a range of methods, including: process-based models statistically fit to long-term monitoring data, Bayesian hierarchical modeling of cross-system data gathered from the literature, multivariate regression modeling of mesocosm experiments, and judgments elicited from scientific experts.

The ability to accommodate such a diversity of methods allows the network to predict outcomes not normally included in TMDL models. All of the submodels include estimates of predictive uncertainty in the form of probability distributions, which are propagated to model endpoints.

Predictions expressed as probabilities give stakeholders and decision-makers a realistic appraisal of the chances of achieving desired outcomes under alternative nitrogen management strategies.

Neu-BERN is one of several estuarine response models used to estimate the TMDL for the Neuse River estuary. However, it is the only one that can quantitatively predict changes in policy-relevant ecosystem outcomes. This is because complex processes are combined into aggregate components described by measurable, operationally defined variables.

The model is a simplification focused on a specific purpose: to support the choice of TMDL by concisely and accurately organizing current scientific understanding and assumptions.