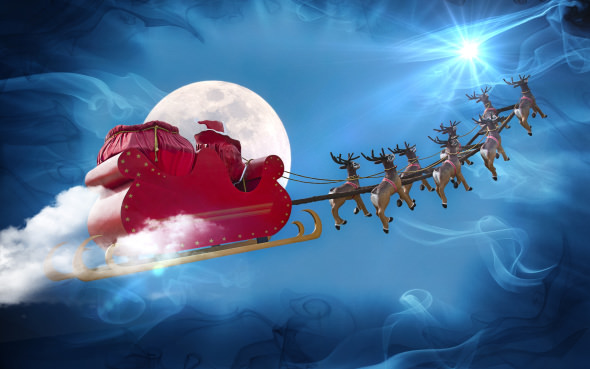 In late December, Santa Claus will embark on his annual Christmas eve ritual, delivering presents to the good little boys and girls around the world. In this article, I look at the net energy expenditure and greenhouse gas emissions attributable to this magical tour.

Many aspects of Santa’s amazing technology are not publicly available, so it will be necessary to make numerous educated guesses to complete the analysis. I will derive an estimate for the total distance traveled, velocities obtained, work expended to reach the implied kinetic energies and energy losses due to air friction. Then I’ll consider the caloric efficiency of reindeer, the methane emissions due to reindeer manure and flatulence and the carbon dioxide emissions during the agricultural production of the carrots used to fuel their trip.

I’ll begin with an estimate of how far Santa must travel on Christmas Eve to visit the 300M or so households with children worldwide that celebrate Christmas. His route constitutes what is known as a Hamiltonian cycle, for which finding the optimal path is NP-hard. To estimate the total length of this tour, I’ll assume that the households are clustered into 2 million towns and cities around the globe, and that Santa follows a Hamiltonian cycle among the metropolitan areas, with an embedded but optimal travelling salesman path among the households within each city or town.

To estimate the distance traversed within a metropolitan area, I’ll use the following formula proposed by Beardwood et al (1959) for the optimal path length in a traveling salesman problem

The length traveled between cities and towns has been studied by Nguyen et al (2003) and Helsgaun (2003, 2007, 2011), and found to be slightly under 5M miles. Hence, in total, we find that Santa travels about 15 million miles in a journey that lasts about 24 hours.

How much energy is required for this 15,000,000 mile journey? While making this journey, energy goes into several forms:

Unlike the regenerative braking found on Toyota Priuses, I cannot think of any mechanism involving reindeer physiology that could reclaim the kinetic energy lost when making a stop or the potential energy lost when descending in altitude. Hence, I’ll assume that that the energies for #1 and #3 are paid fresh with every stop.

Kinetic energy is given by KE = ½ m v2, where m is the mass of the sleigh and v is the maximum speed (velocity) attained. Assuming Santa spends half of his 24 hours in transit (the other half he presumably spends arranging the gifts under the tree), his average velocity is 15M miles / 12 hours = 1.25M mph. For this to be his average, his maximum velocity between stops would be about twice this, or 2.5M mph.

Assuming an average 2kg gift weight per child, distributed among the 780M children that celebrate Christmas, the initial weight of his sleigh is approximately 1.6e+9 kg. This weight will decrease throughout the trip, reaching zero when the last present is delivered, so that the average mass is m=8e+8kg. With appropriate unit conversion, the kinetic energy attained is about 135e+12 kWh per stop, times 300M stops, for a total of 4e+22 kWh consumed by changes in the sleigh’s kinetic energy.

To estimate losses to air friction, my method of estimation loosely mirrors the analysis of MacKay (2009) p. 255. At the sleigh moves through the air, it must displace a tube of air, imparting kinetic energy into those air molecules, causing them to swirl away at velocity v. This kinetic energy of the air is given by ½ r A d v2, where r is the density of air, A is the effective cross-sectional area of the sleigh, d is the distance traveled and v is the speed. Little is known regarding the precise dimensions of Santa’s sleigh. I’ll assume a cross-sectional area of 20 m^2 with a drag coefficient of 0.25, for an effective area of 5 m^2. Using the average speed for v (a slight fudge) and appropriate unit conversions, I estimate the losses to air friction to be about 7e+15 kWh.

Finally, assuming an average 5m change in elevation per household, I find that about 3e+12 kWh are lost to these elevation changes.

In summary, the kinetic energy imparted to the sleigh itself clearly dominates Santa’s net energy expenditure, being far greater than the losses to air friction or elevation changes. The total expenditure is thus estimated to be 4e+22 kWh.

Reindeer derive their caloric energy during the journey from the carrots provided for them by the children at each household, which are conventionally left out next to cookies for Santa himself. During the remainder of the year, the reindeer fulfill their far more meager caloric requirements by eating lichens and moss in the forest.

I begin with the caloric efficiency of a reindeer, and would like to acknowledge Evan Sherwin for providing the core facts in this section. Evan was a consultant at Lumina Decision Systems with some applied experience modeling greenhouse gas emissions from livestock. He is now a Post Doc Scholar in Energy Resources and Engineering at Stanford. As a point of comparison, Pagan et al (2005) found that a horse has a 57% efficiency of utilization of digestible energy for work above rest. Incorporating rest energy, according to Saunders (2007) this efficiency is about 25%, which would be the appropriate number to use here. Thus, to perform the 4e+22 kWh of work during the trip, the reindeer must consume about 16e+22kWh = 2.4e+26 Calories (kilocalories), equivalent to about 4e+24 carrots.

According to the Canadian GHC model, Hutchinson (2010), the annual GHG emissions from manure is 62 kgCO2e/yr (kilograms of CO2 equivalent per year), 5 for a goat. Farts are 378 and 105 kgCO2e/yr for horses and goats respectively. Ottaway (2012) reports that a typical horse consumes 15-25,000 Calories/day. Extrapolating from these, I will estimate that GHG emissions from reindeer manure amounts to slightly less than 0.01 gCO2e per Calorie consumed, and methane from farts to be around 0.03 gCO2e/yr per Calorie consumed. Given the 2.4e+26 Calories consumed during the trip, this amounts to about 1e+22 kgCO2e of GHG emissions from manure and flatulence combined.

The carbon footprint of agricultural production is an area of active study, with varying estimates for different crop types. One representative estimate is reviewed by Savage (2009), which reports 0.15 kg/CO2 per kg of corn produced. Although the number may be substantially different for carrot production, since I don’t have good data specific to carrot production, I’ll use this value. For the 3e+23 kg of carrots consumed, I obtain the estimate that 5e+22 kg of CO2 are emitted during the production of the carrots that fuel Santa’s reindeer during the journey.

Policy makers may want to consider what policies or legislation could be put in place to reduce these extremely large emissions. A sensitivity analysis performed on this model reveals that a reduction in Santa’s maximum velocity would have the greatest impact. Possible approaches for accomplishing this might including employing a large fleet of delivery vehicles or expanding the delivery window over a large time span.

Lonnie Chrisman, PhD, is Lumina's Chief Technical Officer, where he heads engineering and development of Analytica®. He has authored dozens refereed publications in the areas of machine learning, Artificial Intelligence planning, robotics, probabilistic inference, Bayesian networks, and computational biology. He was was in eighth grade when he had his first paid programming job. He was awarded the Alton B. Zerby award "Most outstanding Electrical Engineering Student in the USA", 1987. He has a PhD in Artificial Intelligence and Computer Science from Carnegie Mellon University; and a BS in Electrical Engineering from University of California at Berkeley. Lonnie used Analytica for seismic structural analysis of an extension that he built to his own home where he lives with his wife and raised four daughters: So, he really trusts Analytica calculations!
Subscribe
1 Comment
Oldest
Newest Most Voted
Inline Feedbacks
View all comments

this is really useful one and more updated information. keep doing more.