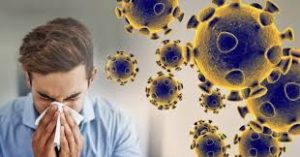 It has only been about a month since the new strain of a coronavirus appeared in the city of Wuhan, Hubei province, China. Yet it seems that the rapid growth of confirmed cases and deaths has captured almost everyone’s attention around the world.  Like many other people, I wondered what the mortality rate of the disease is. If a person is diagnosed with it, what is the probability that person will die from it? For the past two days, since we learned that a case has been confirmed here in Santa Clara county, this has been a repeated topic of discussion here.

I did a Google search and found many really good pages that are tracking the statistics on this outbreak, with the majority of them reporting a mortality rate of 2%. But I quickly realized that they were getting this number by dividing the number of reported cases by the number of reported deaths as of today. That is clearly wrong, because those who have died were diagnosed a few days earlier when the number of confirmed cases was much smaller (the confirmed cases are growing extremely fast). So the mortality rate has to be higher than 2%. 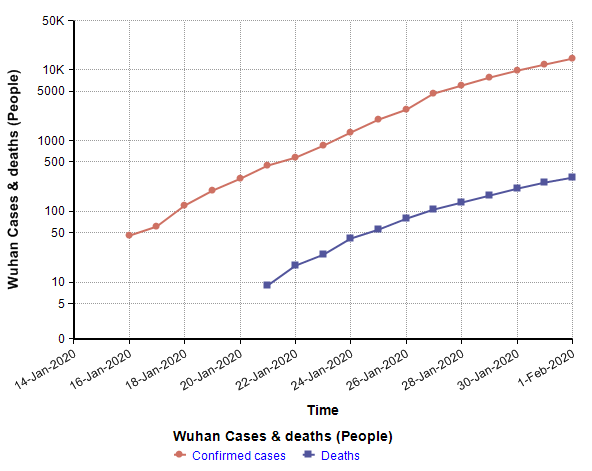 These are close to linear since we are in the early exponential growth phase of the outbreak, and are approximated pretty well by

Let d be the average number of days from reported confirmed diagnosis to reported death of the patients who have died. One way to improve the mortality estimate is to shift the death curve left by d days, and then take the ratio, so that the number of deaths is aligned with the date when the patient was diagnosed.  Using d=2  for illustration (which is nothing more than a guess) the curves now compare as follows. 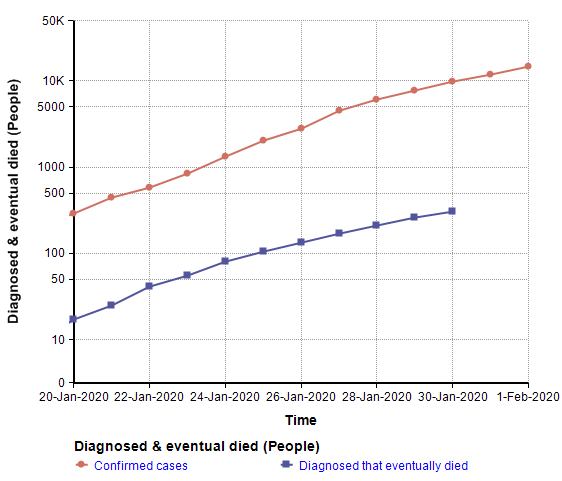 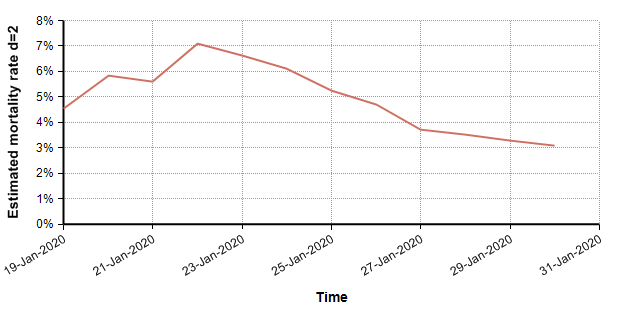 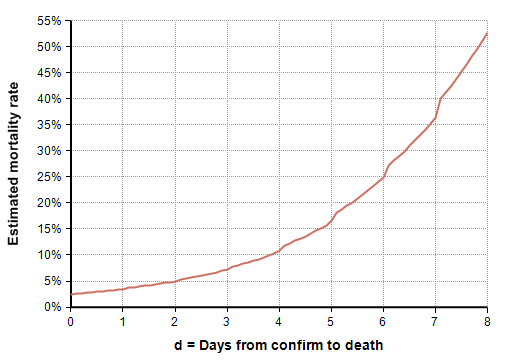 So, a big open question is: What is the latency between diagnosis and death?  This is not the same as the incubation period for the disease.

I came up with one method for estimating the latency, d, from the data, but result is not believable. The idea was simple — the time origins for the two regression fits (given above) are shifted by 12.5 days.  That seems like it suggests a latency of d=12.53.  But that yields a mortality rate of 240%. If the vast majority of people who died from it never appeared in the confirmed cases, but were listed in the number of deaths, the ratio of deaths to confirmed cases could theoretically surpass 100%, but this seems implausible to me.  I think it is safer to conclude that this method for estimating latency is unreliable due to many other confounding factors.

This outbreak is scary.  Nevertheless, if you are a modeling aficionado, given our current state of uncertainty, it gives us a lot of opportunities to build interesting estimation models. From the following hyperlink, you can download the very simple Analytica model that I created while writing this post. 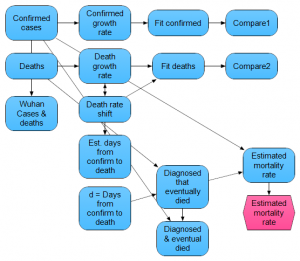 Lonnie Chrisman, PhD, is Lumina's Chief Technical Officer, where he heads engineering and development of Analytica®. He has authored dozens refereed publications in the areas of machine learning, Artificial Intelligence planning, robotics, probabilistic inference, Bayesian networks, and computational biology. He was was in eighth grade when he had his first paid programming job. He was awarded the Alton B. Zerby award "Most outstanding Electrical Engineering Student in the USA", 1987. He has a PhD in Artificial Intelligence and Computer Science from Carnegie Mellon University; and a BS in Electrical Engineering from University of California at Berkeley. Lonnie used Analytica for seismic structural analysis of an extension that he built to his own home where he lives with his wife and raised four daughters: So, he really trusts Analytica calculations!